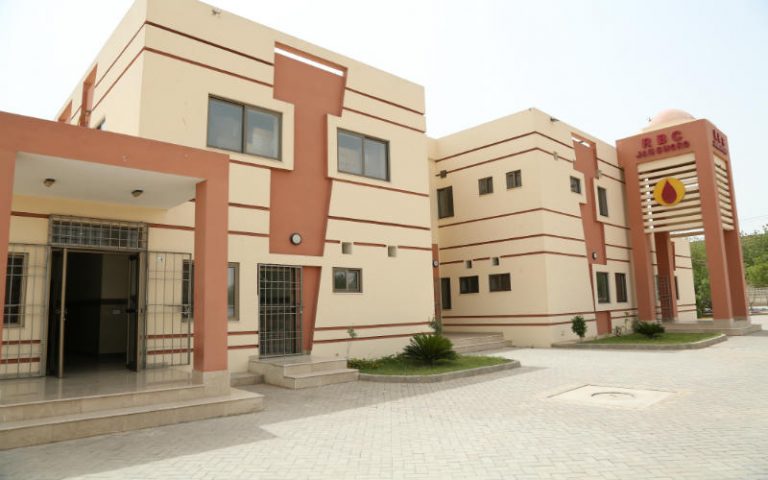 The Jamshoro Blood Centers was among the 10 Regional Blood Centers developed with the German government grant of Rs. 2 Billion (15 million Euro) through KfW as part of the establishment of a nationwide network of 10 modern blood centers and up-gradation of 59 existing hospital-based blood banks all over the country in the first phase of the Safe Blood Transfusion Project (SBTP). The second phase of the Project, the scope and coverage will be expanded with continued Germen support of Rs. 1.3 Billion (10 million Euro). In Sindh, four RBCs one each in Sukkur, Nawabshah, Jamshoro and Karachi have been developed and 24 hospital blood banks provided new blood storage equipment with German grant of Rs. 600 million (5.2 million Euro). In Phase II, 3 public sector blood banks i.e. JPMC Karachi, Civil Hospital Karachi and Civil Hospital Korangi and up to 2 NGO blood banks will be up-graded and strengthened with German grant of Rs. 87 million (0.674 million Euro).

Speaking on the occasion the Secretary Health expressed his appreciation to the German Government and KfW for the gift of 4 Regional Blood Centres to the people of the Sindh. He appreciated German delegation for especially coming to Jamshoro for the Inauguration ceremony and committed full support for the smooth functioning of the new Regional Blood Centres and the implementation of the Blood Programme in the province. Secretary promised to operationalise the remaining 2 RBCs of Nawabshah, and Karachi in coming months. To achieve the quality standard and ensure supply safe blood, he said the management of the Jamshoro Regional Blood Centre is out-sourced to Indus Health Network under the private-public-partnership. He said that the Sindh is only province in the country where 4 modern RBCs were established with financial assistance of German Government through KfW and being operationalised under the public private partnership arrangements.

The KfW Country Director congratulated the Secretary Health and his team for their keen interest in the implementation of the Blood Project in their province as well as for organizing the inauguration of the RBC Jamshoro. He expressed the hope that these Centers will herald a new era of blood safety for the people of Sindh. He termed the Safe Blood Transfusion Project a ‘success story’ and appreciated the untiring efforts of the federal and provincial governments in making the project a success. He urged the Sindh Government to immediately operationalise the RBCs of Nawabshah, and Karachi and establish strong linkages between RBCs and HBBs.

In his remarks, Dr. Zahid Hasan Ansari, Secretary, Sindh Blood Transfusion Authority thanked the German government, KfW, Prof. Hasan and assured full operationalisation of all the 4 regional blood centres and promotion of voluntary donations. He also thanked the Secretary Health for his keen interest and support extended in the operationalization of Regional Blood Centres. He said, without German Government’s generous support, we may not have modern RBCs in Sukkur, Nawabshah, Jamshoro and Karachi and modern equipment in our 24 hospital blood banks of Sindh. The Sindh Government has taken responsibility of running the modern regional blood centres and contributed Rs. 252 million for staffing, consumables, utilities, and 8 cold chain vehicles and other operating costs. The Sindh government will provide annual running cost of over Rs. 175 million for these 4 RBCs. He also appreciated the support provided by EPOS and GOPA German consulting companies for the design and implementation of the project and Indus Health Network team for operationalisation of RBC Jamshoro.

Dr. Abdul Bari Khan CEO Indus Health Network thanked Sindh Government for putting their trust and confidence in the Indus Health Network and giving the management of RBC to Indus. He assured supply of safe blood products/components to the attached hospitals following international quality standards. He requested health practitioners and health managers to cooperate with RBC Jamshoro management for rationale use of blood and blood components and establishment of strong linkages with RBC.