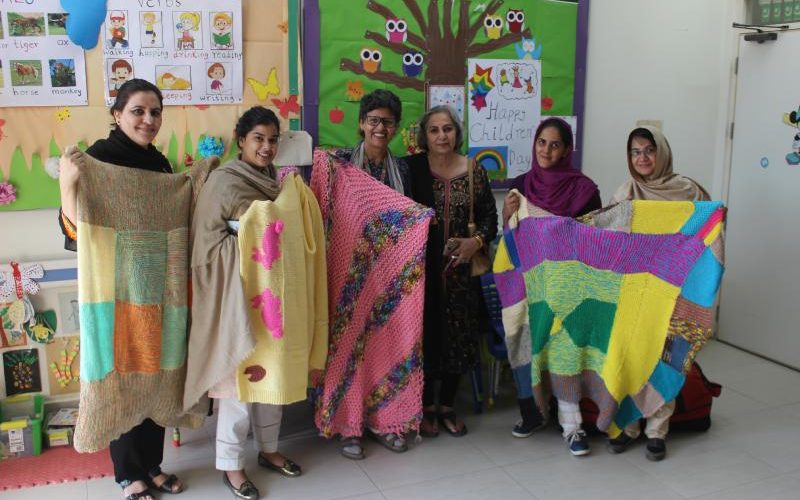 The knitting community of UAE has set a Guinness World Record by creating a Knitathon for creating the world’s largest blanket with the largest number of heart icons. Women of 27 nationalities knitted 3,200 blankets that were then all put together in Dubai to form the largest blanket in the world which measured 3,150 square meters. Women knitting from UK, Canada, Philippines, Nepal, India, Pakistan, Saudi Arabia, Ethiopia and other countries had decided that after competing in the challenge they would donate these blankets to orphan children all across the world.

After setting the Guinness World Record for the world’s largest blanket, the blankets were distributed to kids at the Mother Theresa home in Calcutta, an orphanage in New Delhi, Kenya, Syria and Scotland. The knitters decided to donate these blankets to children in Pakistan also. In Pakistan, they chose two organizations to donate sixty six blankets to – The Indus Hospital and Edhi Center in Karachi.

Thirty three colorful and warm blankets were brought to the Indus Hospital to be distributed at the Pediatric Ward amongst patients admitted in the ward. The pediatric patients and their attendants were very pleased to receive these blankets at the advent of winter. This activity was a very heart-warming activity that served to showcase the kindness and empathy of people from all over the world for children that they had never met before. The Indus Hospital congratulates the knitting group for setting the Guinness World Records and thanks them for donating some of the blankets to the Indus Hospital.