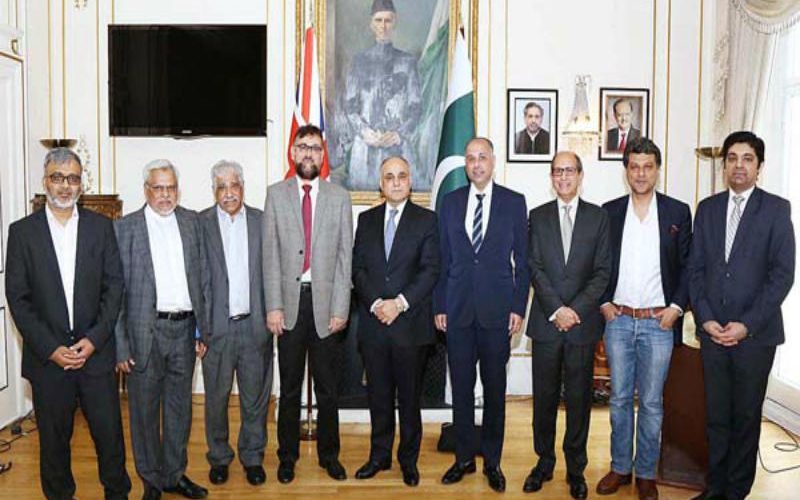 LONDON, Apr 23 (APP): A delegation of the Indus Health Network (IHN) led by its founder, Dr. Abdul Bari called on Syed Ibne Abbas, Pakistan High Commissioner to the United Kingdom (UK) here on Monday and discussed various key initiatives undertaken by their organization for the provision of better health services in Pakistan.
The delegation was accompanied by Sajjad Karim MEP, who also supports the network.
A statement of the Pakistan High Commission (PHC) issued here Monday said Dr Abdul Bari gave an introduction of the network to the high commissioner stating that it was initiated in 2007 by a team of
committed healthcare professionals, entrepreneurs and philanthropists, which changed the dynamics of healthcare system in Pakistan.
He informed that they started a tertiary care hospital in the urban slums of Karachi and in a very
short span of time, free of cost quality treatment became the hallmark of The Indus Hospital, attracting
patients from all over Pakistan, said Dr Bari.
The high commissioner in his remarks commended the philanthropic spirit of Dr Abdul Bari and his entire team.
He said health sector of Pakistan needs more such networks as IHN to cater the health needs of our growing population.
The high commissioner called upon the medical fraternity of Pakistan working abroad to get together on a single platform and serve the country.
In this regard, he assured the Mission’s all possible support to the delegation, including fast track
Pakistan visas to health professionals on the recommendation of the network.
He further offered that the network could hold their events at the Pakistan High Commission, London.
The high commissioner appreciated Sajjad Karim MEP for his support to the IHN’s initiatives.
It was informed that in order to cater to the ever-increasing number of patients, The Indus Hospital
has been expanding its services by launching secondary and tertiary care hospitals. In the year 2016-17, the Indus Health Network emerged with 11 secondary and tertiary care hospitals across Pakistan.
The delegation informed that some of IHN hospitals were managed and financed by the network itself and some were only managed by the network under the umbrella of public-private partnership.
With the establishment of hospitals, the network soon identified that early detection and prevention
are as important as the provision of quality treatment.
To cater to this need, the network established family medicine clinics and launched a large number of public health outreach programs across 41 districts of the country.
Other members of the delegation included Karim Paracha, Ibrahim Jamali, Anwar Zaidi, Mukarram Sattar, and Faraz Khan.

Giving a brief detail of the impact of the network in Pakistan, they said 158,418 patients were
treated per month (July 2017-Feb 2018) Since 2007 more than 6.7 million patients have been treated.
Highlighting the key initiatives of their organization, they said a Blood Center was established
in 2013 that mobilized the nation towards 100% voluntary blood donation; provision of safest possible blood screened on international standards.

Regarding the Disease-based outreach programs, they said that a “Aao TB Mitao” (Come and eliminate TB) program was also initiated and scaled up through collaboration with National TB Program of Government of Pakistan & private sector stakeholders; funded by Global Fund for AIDS, TB & Malaria, TB REACH & donor agencies.
To date, they said 1.7 million patients have been screened for TB through the program.
They further said under their Malaria Program  provides quality malaria diagnosis, treatment and
preventive services to the rural population of 12,275,694 in 18 high endemic difficult to reach districts of
Pakistan, while under HIV program which was started in December 2016, focusing on scaling the programmatic management of PWIDs affected by HIV.